Be part of this important discussion with LBFE Chicago and these outstanding experts: 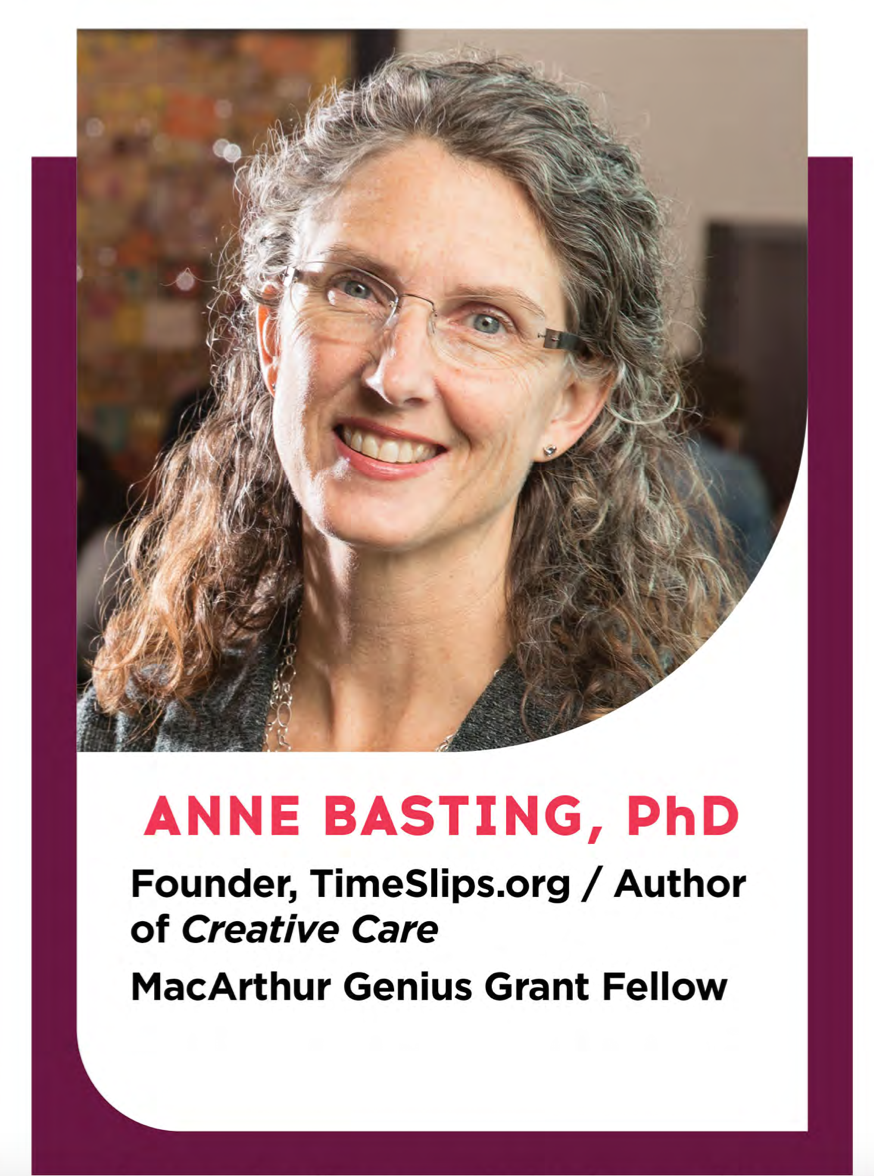 Anne Basting is a writer, artist and advocate for the power of creativity to transform aging care. She is Professor of English at the University of Wisconsin Milwaukee and Founder of the award-winning non-profit TimeSlips.org, which trains, inspires, and supports caregivers to infuse creativity into care. Her writing and large-scale public performances have helped shape an international movement to extend creative and meaningful expression from childhood, where it is expected, through to late life, where it has been too long withheld.

Her books include Creative Care: A Revolutionary Approach to Elder and Dementia Care (Harper), Penelope: An Arts-based Odyssey to Transform Eldercare (U of Iowa), and Forget Memory: Creating Better Lives for People with Dementia (Johns Hopkins). Internationally recognized for her speaking and her innovative work, Anne is the recipient of a MacArthur Fellowship and numerous major awards and grants. She believes that creative engagement can and should be infused into every aging care system and has trained/consulted with Meals on Wheels, libraries, home care companies, senior centers, memory cafes, museums, adult day programs, and every level of long-term care.

In 2019, Anne collaborated with a team of artists, elders, and caregivers on her largest project yet – a reimagining of the story of Peter Pan with 12 rural Kentucky nursing homes. She is currently at work on a book and art exhibit about caring for her mother and on Stories We Know by Heart, a series of intergenerational, creative workshop guides based on classic folk and fairy tales.

Neenah Ellis is the Executive Director of the Center for Community Voices at public radio station WYSO in Yellow Springs, Ohio — a role she assumed after serving 10 years as the station’s general manager. Her work today involves training community members whose voices are underrepresented in media and enabling them to tell their own stories.

In 2002 she published a book called If I Live to be 100: Lessons from the Centenarians, based on her NPR series about people who are 100 years old. Neenah travelled all around the U.S. to interview people in their homes. The book was published in several languages. It was a New York Times bestseller, and it’s still in print.

In her distinguished broadcasting career, Neenah served as a news producer and writer in Washington, DC, for NPR’s “All Things Considered” for 10 years. Assignments took her to war zones and areas of conflict in eastern Europe, Africa, the Middle East, the former Soviet Union as it emerged from the Soviet system, and to every part of the U.S. Her work for NPR won the Alfred I. DuPont/Columbia University Award and three George Foster Peabody Awards, broadcasting’s highest honor.

In 1988, she produced a live entertainment program called “Good Evening” at the World Theater in St. Paul, MN, Minnesota Public Radio, hosted by Noah Adams. She was a producer and writer for NPR’s “Making the Music,” hosted by jazz musician Wynton Marsalis and also was the founding producer of “Anthem,” a popular music and culture program in 1998.

Her grandparents all immigrated to the South Side of Chicago from Croatia, and she was raised in Valparaiso, IN, where her parents ran a radio station. She studied journalism and graduated from Drake University in Des Moines, Iowa.

Dr. Jeremy Nobel is a Primary Care Physician, a Public Health Practitioner, and the Founder and President of the Foundation for Art & Healing. The Foundation’s signature initiative, Project UnLonely, has gained national visibility by raising awareness around the physical and mental health challenges of loneliness, reducing stigma surrounding it, and offering arts-based programming that fosters a sense of connection and belonging.

Dr. Nobel is also a published poet, receiving several awards for his poetry including the Bain-Swiggett Prize from Princeton University and the American Academy of Poets Prize from the University of Pennsylvania.